Why Does Joe Carry the Shield of his Caesar?

of Hearts people do. One too many Ego's, no Diamond Cards and the Scorpio-Sagittarius Cusp of Revolution. Lovable Joe is the KING of Hearts "The Loving Father Card," which is a very good thing in any field of endeavor especially entertainment. The rub for Uncle Joe, comes with two black Ego cards in the all red card KING of Hearts pond. "I thought they'd get one of us, but Jack, after all he's been through, never worried about it I thought it would be me." - Robert F. Kennedy

the Day of the SCRAMBLER: November 20 people are born fighters and thus tend to find themselves involved in struggles of all kinds. Often controversial, their ideas and personality invariably become a focus of discussion and scrutiny. Those born on this day may also display a rebellious affect, though they are in fact extremely loyal to their family, company and social circle. It is generally due to the extreme nature of their views and their forceful manner of expressing them that they arouse antagonism. Rarely will they tone down their rhetoric. Indeed, they would rather fight than switch. SCORPIO-SAGITTARIUS CUSP - The Cusp of Revolution November 19 - 24: Not all revolutionaries are wide-eyed, bomb-throwing idealist; within the souls of many fights for human rights lurk secret autocrats, who, once in power, may themselves be toppled by a further revolution. The revolt that engages those born on the Scorpio-Sagittarius cusp is often the fight against sloppiness, bad taste, ineffectualness, stupidity and old-fashioned, outworn attitudes. They are capable of exploding old myths, true, but they are equally capable of reviving and preserving myths that they view to be useful. Thus those born on this cusp can also be secret traditionalists at heart.

the Day of the SCRAMBLER: the Day of the SCRAMBLER: takes a pragmatic approach to being the "Loving Father," with a FOUR

of Clubs "Satisfaction in Knowledge" and a second Ego, the FOUR

of Spades "Satisfaction in Work." In their Heart they know they are right but they are missing a Diamond an Upper-Right brain Cerebral Intuition card but they are loved wherever they go to fight the fight of others. Robert F. Kennedy, Joseph R. Biden Jr., and John R. Bolton each carried the shield of their Caesar. 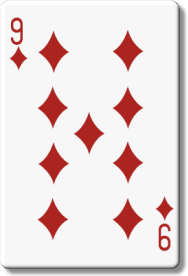 of Diamonds in the Saturn Period

This card brings a disappointment in finances related to ill health or the death of someone. There could be trouble with an inheritance or money spent on health care or a funeral. Any extravagance or speculation are bound to bring difficulties now. Any deviations from fairness or legitimate transactions will bring heavy consequences.

The essential meaning of this card is 'letting go of something valued'. This could be a job, a relationship, or some other thing or things that you have held dear for quite some time. In this case, this would be a personal challenge for you, one that has a specific lesson to teach you. Keep in mind that though Saturn is the teacher, he is also the helper. The lessons we learn under his influence always bring us more maturity, fairness and the ability to have much greater success in our lives.