teg do you honestly believe this astrology stuff?

Ab-so-luta-mente. My FEAR of Rejection drove me to study what makes people tick? At Case Western Reserve University's Weatherhead School of Management their term for this subject matter was Psycho-metrics. Carl Jung, father of analytical psychology, created the Quadrant Theory of personality types. 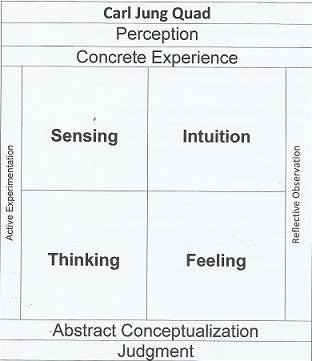 The mother-daughter team of Myers-Briggs ran with it and put people in 16 character or archetypes according to their answers to 166 questions. The Jungian theory is we choose either Sensing, Intuition, Thinking or Feeling to be the Captain of our personality ship. By age three we choose our 2nd Lieutenant executive assistant opposite our first choice. Example a Thinking infant will perceive the world by Sensing or Intuition. Alternatively, a Sensing Captain will choose either Thinking or Feeling as the way to go. 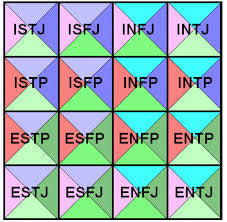 I got typed as an ENFP "Journalist" or a borderline ENTP "Architect." Even though I was a practicing architect at the time I related more to the "Journalist" moniker.

Dr. David Kolb, America's foremost learning behavior theorist, was chair of the CWRU school of Organizational Behavior and had his own quadrant theory of "How we learn." My learning disability was proven out when there were only two of us,out of our class of forty, in the upper right hand quadrant - we were Divergers who didn't want to be inside any box but were not conscious of our core competency. Kolb gently changed our understanding by informing us we had no business being in business school. 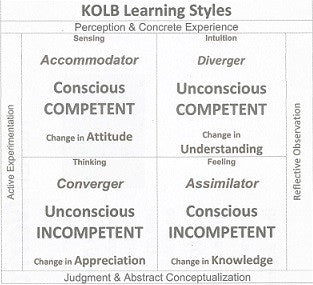 Real world confirmation that this was more than an academic exercise came in my new home sales training course where they put animal pictures in the four squares. When the bull prospect came through the door - just give him the facts, the owl the logic, the tiger the sizzle, the lamb the romance. 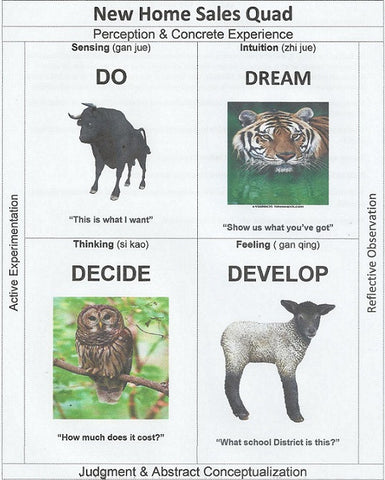 My classmate from architecture, Mike Was, has actually written two books on quadrant theory linking them to our DNA, brain chemicals, the four elements NHCO, DISC, MBTI and the bestest one of all ordinary playing cards 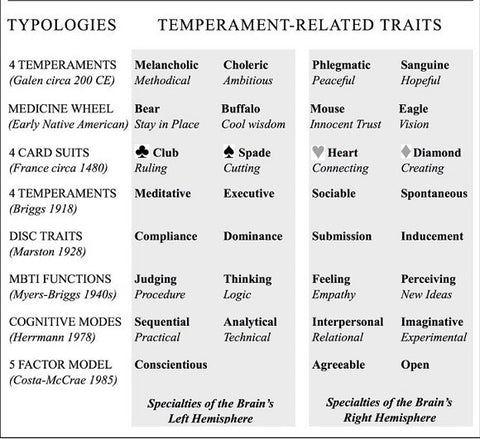 That's the 52 card question. Dr. David Wolf, another OB professor at CWRU, specialized in mid-life transition 45-55. I was 40 then but five years later my transitioning was not going well. It took psychiatry, psychotherapy, drugs and thrice weekly AA meetings to put me back together again. On my 63rd birthday I became a widower and had two sessions with my wife's best friend's psychic. Sean, an Indian, who had converted to Christianity, made me skeptical until Sean's opening remarks about my most intimate sexual experience - how'd he know that? - instantly changed my belief system. 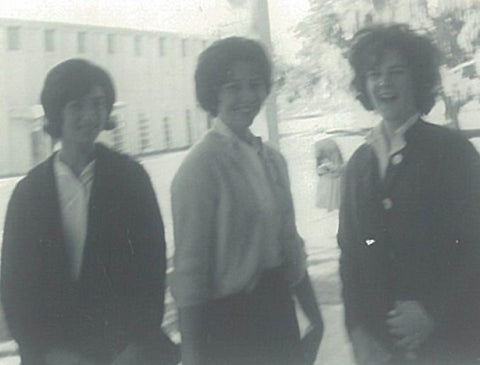 Sean read photos - I showed him a 45 year old Polaroid of a former girlfriend - "Oh, she's trouble." She was the black sheep of the five girl, two boy family. Which one? No, not the one on the right, nor the middle.

Show Sean any picture and past, present and future were instantly revealed. Sean's revelations concerning my wife's death, the two step-kids, and my future sojourn to Eugene, set me up for karma, dharma, astrology, ashrams, meditation, numerology and fortune-telling using Robert Lee Camp's Love Cards and Cards of Your Destiny. 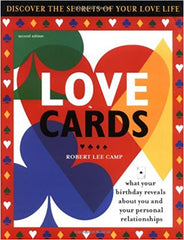 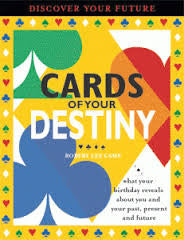 The Love Cards book gives a four page analysis of each of the fifty-two cards plus the Joker. I call it an astrological personality chart for 'Dummies.' The Cards of Destiny maps out each year from zero to ninety-nine, into seven 52 day periods, plus a focus, challenge, result/reward and two situational cards. The future forecasting was proven for me by looking at my past Challenges and Results

Gina E. Jones presents the Four Suits, part of the DVD "Unlocking the Sacred Book of Destiny: Introduction to The Cards of Life." Gina is one of the more informative disciples of Robert Lee Camp's Card System. Not knowing diddle about astronomy in 2008, I'm impressed with how Gina links the cards to astrology and/or astrology to the cards.

Below is the 'yearly spread,' as it is known, for every JACK of Clubs born on October 11th celebrating their 54th birthday. There are 10 - 12,000 October 11th JACKS born each year in the United States alone, maybe 200,000 worldwide.

who made it to fifty-four in the past, present and future. 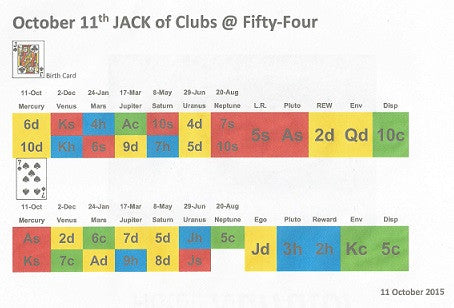 There's forty cards in twelve different positions, which after awhile you can see the good and not so good news for each one of those 200,000 people. However, their interpretations of their future is conditioned on where they are living, are they married, divorced, gay, straight, black, white, yellow, brown, red, poor, rich, etc, etc, etc. Like a hedge fund back checking their algorithm, you can read the chart for previous birthdays.

Previously, I would have to manually look up the meaning of each of the last five cards, their influence remains for the entire year. Now, with Robert Lee Camp's software every report explains in 'layman' language, Birthdays, Relationships, Money, Karma, Dharma and Life Path.