"An actor is totally vulnerable. His total personality is exposed to critical judgment - his intellect, his bearing, his diction, his whole appearance. In short, his ego." - Alec Guiness 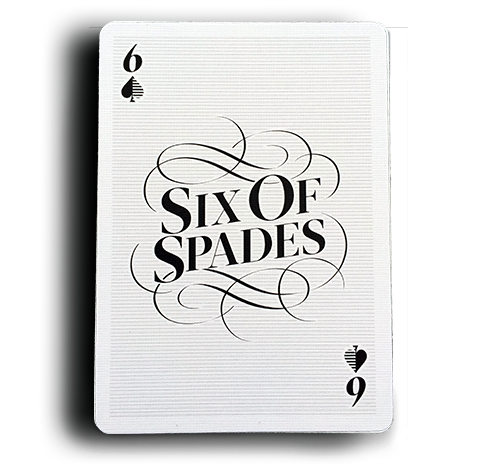 of Spades: The Card of FATE - The SIX of Spades is called the card of Fate because it is the strongest symbols of the Law of Cause and Effect. What we sow, we shall reap, for good or ill. When our birth card is a Six, we can expect there to be 'fated' events at different times in our lives. These are events that were set in motion by our actions or words in previous lifetimes whose effects were set aside to be experienced later, when conditions are right to create an equalizing of those events. Some of these events can be positive and helpful, while others may show us what it is like to be on the receiving end of some negative occurrence. For the most powerful of the Sixes, the (

), life just seems to have more of these fated events than most, so much so that many (

) begin to equate life as a place where they have few choices and little power to change its outcome. It is true we cannot change events once they are set in motion, but there are still many events in life over which we have tremendous responsibility, and our choices in this life are always important in this regard. This is one of the major lessons for the (

Karma: FATE
Your karma cards are the

TWO of Spades. You owe the 9 of Spades and the 2 of Spades owes you. cannot stop thinking about love and romance. At the same time they have a somewhat mental approach to the whole situation that causes them to undergo many experiences, both up and down, while they gather experiences to back up their concepts and ideas.They can tend to be drawn into multiple relationships and this usually has negative consequences for them. The desire for multiple relationships is usually rooted in their hidden fear of not getting enough affection that underlies these attempts. This fear is symbolized by the 3

of Hearts in Saturn, can make it very difficult to have true intimacy with another until it is recognized and acknowledged. of Spades: This is the Card of overcoming, and all Six of Spades people are strong willed and determined; often fixed and stubborn! The Six of Spades have great potential and power in their Life Pattern of Cards, but if they don't accept the responsibilities that are being constantly placed upon them, they will drift toward discouragement, lack of initiative, and ultimately, what one could call a very boring life! The Six of Spades people are strictly just - and they may seem hard and unfeeling at times. Intuitively, they know that there is no death, only Eternal Life. It is this truth that they have come to fully realize in our finite world of mortality. Tried and tested throughout their lives, when the Six of Spades are beaten down it is only to rise up, and try even harder the second, or third time around!  http://www.metasymbology.com/